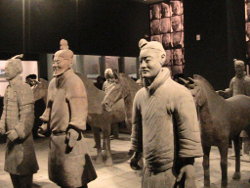 As it turned out, there were thousands of them buried in what formed an elaborate mausoleum for the first emperor of China, Qin Shi Huang.  Emperor Qin united a number of warring tribes in the region.  He is thought to have begun the earliest version of the Great Wall and was responsible for standardizing weights and measures and establishing a unified monetary system.

Soon after Qin took the throne as emperor, he ordered the construction of a mausoleum, which included his burial tomb.  This tomb has not been excavated.  Archaeologists say that some writings that were discovered suggest the tomb may be filled with great treasures.  There may also be underground rivers filled with mercury, according to legend.  Recent tests on the soil in the tomb mound indicate high levels of mercury that seem to support that theory.

Known popularly as the Terracotta Army, the figures were created to guard Emperor Qin’s tomb and accompany him into the afterlife.  These figures were placed in pits east of Qin’s burial tomb, a position that would have been ideal to defend the emperor from his conquered states that lay to the east.

Each figure was placed in military formation in order of rank and positioned in trench-like corridors carved into the earth.  Some of these trenches contained clay horses harnessed to wooden chariots.  An arsenal of ancient weapons was also discovered here.  Additionally, archaeologists have found an entire man-made necropolis for the Emperor around his tomb mound.

There are perhaps as many as 8,000 terracotta soldiers, but since most are still buried, it’s only an estimate.  Additionally, there are deemed to be 130 chariots pulled by 520 horses, and 150 cavalry horses.  Other terracotta non-military figures were found in smaller pits.

The excavated figures were originally painted with brightly-colored pigments.  But when they were exposed to air and sunlight, their colors faded into gray or flaked off.  Scientists have used remote sensing technology to discover thousands more soldiers still buried at the site.  But archaeologists have chosen to leave the majority of these figures buried until such time that science can figure out a way to preserve them.

What struck me most when I saw the few hundred of them that had been excavated was that each warrior’s face was different from the next, and they were quite detailed.  Each life-sized soldier was unique and had personality, and each figure was ready for battle.  They varied in height, uniform and hairstyle, according to their rank.

Four pits have been partially excavated, three of which are filled with terracotta soldiers and horses.  The fourth pit is empty and was perhaps an unfinished corridor.  In addition to the four pits, a number of smaller pits that form the necropolis have been excavated.

The first pit that I viewed was huge, about the size of an American football field.  The perimeter was packed with tourists, all jostling for a place in front to get a clear view of the warriors below.

Aggressive salesmen with trinkets to sell slipped in front of us to show their wares.  It all added up to a carnival-like atmosphere that sometimes tried my patience.

These ancient figures are a major tourist draw for the region.  In fact, it seemed to be the only reason to go to Xi’an.  Though there may be hidden gems in the city that are worth seeking out, they are not advertised to tourists.  However, it was well worth the long trip and hassle to view these figures in person.  They’re among the most extraordinary of any manmade works I’ve ever seen.  I’d like to see them again someday. 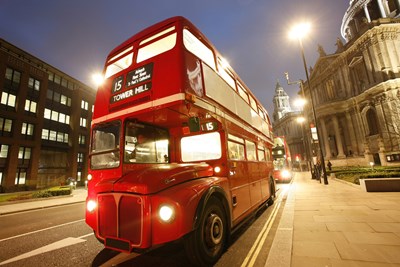 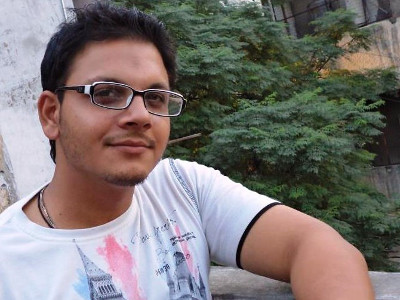 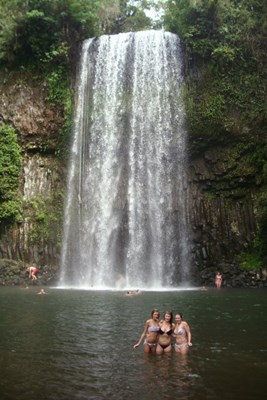 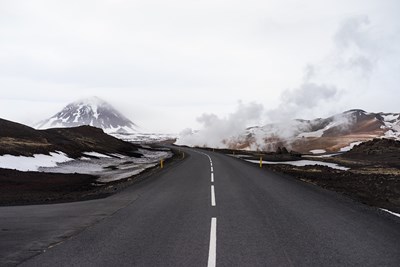 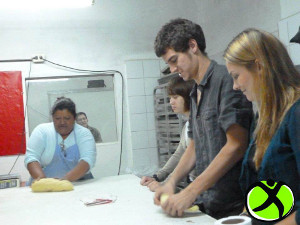